The Truth Will Out – An interview with author Jane Isaac

I’m talking about the release of the crime thriller, The Truth Will Out (Legend Press), featuring another case for DCI Helen Lavery, written by my good friend, author, Jane Isaac.

This is the second DCI Lavery adventure, the first being An Unfamiliar Murder (Rainstorm Press), which was released two years ago. An excellent and fast paced thriller, it introduces the reader to Helen Lavery, a widowed mother of two teenage boys and career driven DCI proving herself as a homicide detective.

Arriving home from a routine day at work, Anna Cottrell has no idea that her life is about to change forever. But discovering the stabbed body of a stranger in her flat, then becoming prime suspect in a murder enquiry is only the beginning. Her persistent claims of innocence start to crumble when new evidence links her irrevocably with the victim… Leading her first murder enquiry, DCI Helen Lavery unravels a trail of deception, family secrets and betrayal. When people close to the Cottrell family start to disappear, Lavery is forced into a race against time. Can she catch the killer before he executes his ultimate victim?

(The above is the book description shown on Amazon.co.uk)

I have known Jane for a couple of years, in fact we first met just as An Unfamiliar Murder was appearing in the shops, and a few days before Jane did her first book-signing at Waterstones in Kettering. She had agreed to meet me to give some hints and tips about writing and publishing, a path along which I was taking my first few faltering steps. I cannot underestimate the value of that meeting as I gained a very valuable, friend, ally and sounding-board. In fact the only difference between us now is that she is a respected, published author of crime novels and short stories, invited to Q&A panels on fiction writing, and does genuine book-signings and I, not to put too finer point on it, am none of those things! To make things quite intolerable Ms Isaac is a thoroughly nice and unassuming individual whose literary feet, as we shall see, are planted firmly on the ground, in spite of her continued success.

In fact I was invited to the official launch and book signing event for The Truth Will Out which took place at Waterstones in Market Harborough on 4th April; and a very enjoyable and well attended ‘do’ it was. It was a great pleasure to be there and share the moment with Jane, who was kind enough to give me a mention in her address to the guests, and better still pointed out my name in the acknowledgements of The Truth Will Out (I knew I’d get into print somehow!)

This lengthy introduction is merely the lead-in to an interview which Jane very kindly did for me. In fact, on reflection, it seemed more of an interrogation than an interview (old habits die hard), but Jane dealt with the questions with her usual demure charm and I hope you enjoy reading what she had to tell me.

The Truth Will Out (Legend Press)

Both available through Amazon.co.uk and Amazon.com

Can you describe the journey from first submission of your manuscript to securing publication – I know it was a bumpy ride?

Yes, the road has been a little rocky. When I finished my first book, An Unfamiliar Murder, I was still studying creative writing and it was my tutor who encouraged me to submit it to agents. I didn’t expect a positive response (you get so used to receiving rejections in this industry) so you can imagine my surprise when two literary agents expressed an interest.

I signed with a London agent and we worked on the novel to edit it before he submitted it to the major publishing houses. It was an exciting time but, although the feedback was very positive, nobody signed the book. The rights reverted to me and I decided to try my luck with the independent publishers and very quickly signed with US based Rainstorm Press who published it in February 2012.

For my second book I decided to pursue a UK publisher to help with the distribution over here which meant I had to plunge myself back into the submissions process once again. It’s a strange time when you are waiting to hear, especially as they quote reading times of 4-6 months in some cases! Luckily it was picked up by the lovely Legend Press team in London and we signed last April.

How did it feel to land that first deal?

Exhilarating to say the least! I remember phoning my husband at work and ‘whooping’ down the phone! I think I almost deafened him.

That was a good couple of years ago now, has anything changed?

I’ve certainly learnt an awful lot more about this strange world they call publishing in the intervening period. There’s so much that goes on behind the scenes to market and promote a book that I hadn’t really considered before. A presence on social media seems essential these days, as are running a regular blog and attending real events. We may have written the best book in the world but unless people know about it, nobody is going to read it. It’s certainly a learning curve.

You have changed publisher for your latest book, The Truth Will Out. Is there anything you can/will share about this turn of events?

My first book was only made available in my local stores and online, so the main motivation for the change was to help with distribution in the UK. Since I joined Legend Press I have been supported by a lovely publicity team who are so helpful and work tirelessly for their authors, which certainly helps on the promotional side.

Motivation must be a big thing for you. As a working, family woman where do you find the time, energy and privacy you need to sit down and write?

I’m very lucky to have an understanding family that doesn’t moan when I burn the dinner because I am stuck in the middle of an exciting scene; or tap away at the keys until the early hours of the morning. A must, I think!

I don’t really have an established writing routine. I pen my words whenever I find a gap: before work when the house is quiet; beside the pool when my daughter is in swim class. I’ve even been spotted jotting ideas down while standing in a supermarket queue.

Your ‘leading lady’, DCI Helen Lavery, is also a working family woman, striving to make a career in the demanding world of major crime. What do you think is her greatest strength and her greatest weakness?

Helen is both focused and guilt-ridden. She really cares about her victims and pulls out all the stops to track down a killer but, as a single parent of teenage boys, she always feels that she is neglecting her responsibilities closer to home.

Are you willing to share your great strength and your greatest weakness with us?

I had some help with this one. Courtesy of the family – apparently I’m committed and loyal. If I set out to do something I usually stick with it. My greatest weakness is… chocolate!

DCI Lavery is a widowed mother of two teenage boys, working long and unpredictable hours in a stressful environment. Is she going to have any time for a little romantic diversion?

The Truth Will Out is published soon, and we are all looking forward to that. What snippets can you give us to whet the appetite?

“Everything’s going to be okay.”

Suddenly, she turned. For a split second she halted, her head inclined.

She whisked back to face Eva.

“There’s somebody in the house…”

Eva is horrified when she witnesses an attack on her best friend. She calls an ambulance and forces herself to flee Hampton, fearing for her own safety. DCI Helen Lavery leads the investigation into the murder. With no leads, no further witnesses and no sign of forced entry, the murder enquiry begins.

Slowly, the pieces of the puzzle start to come together. But as Helen inches towards solving the case, her past becomes caught up in her present.

Someone is after them both. Someone who will stop at nothing to get what they want. And as the net starts to close around them, can Helen escape her own demons as well as helping Eva to escape hers?

Can you share your experiences of book signings with us?

As a new writer signings can involve long periods sitting alone since people don’t know who you are. Luckily my family rallied around, my daughter made cakes and my husband chatted to shoppers who came into the bookstores, so there were always people about. I’m very grateful to them for that and would certainly recommend bringing friends and family along. Also, book signings take a lot of organisation – it’s essential to announce your presence, put up posters beforehand, get on the local radio if you can, and also into the local press. It all takes time but it’s worth it in the end.

Come on now, give the rest of us hacks some tips on getting published…

Write, write, write. Share with others and invite critiques, rework your script until it is the best you can do, then submit and start a new project. Never give up.

I know that there’s a third book in the pipeline. What can you tell us about that?

My latest work in progress is a crime thriller based in nearby Stratford upon Avon. I’m presently undertaking lots of research field visits, which I am enjoying immensely! I’ve also started the third in the DCI Helen Lavery series, which I hope to finish by the end of the year.

Song – What a Wonderful World by Louis Armstrong

Art – A photo my husband took of our daughter when she was young, wandering through a field of wild grasses.

Thank you so much for inviting me onto your lovely blog, Glyn. It’s been great fun!

Thank you to author Jane Isaac. I’m sure we all wish her the best of luck with her new book The Truth Will Out – better still get yourself a copy and put The Truth Will Out on the best-seller list – I’m sure that the hard-working DCI Helen Lavery would approve! 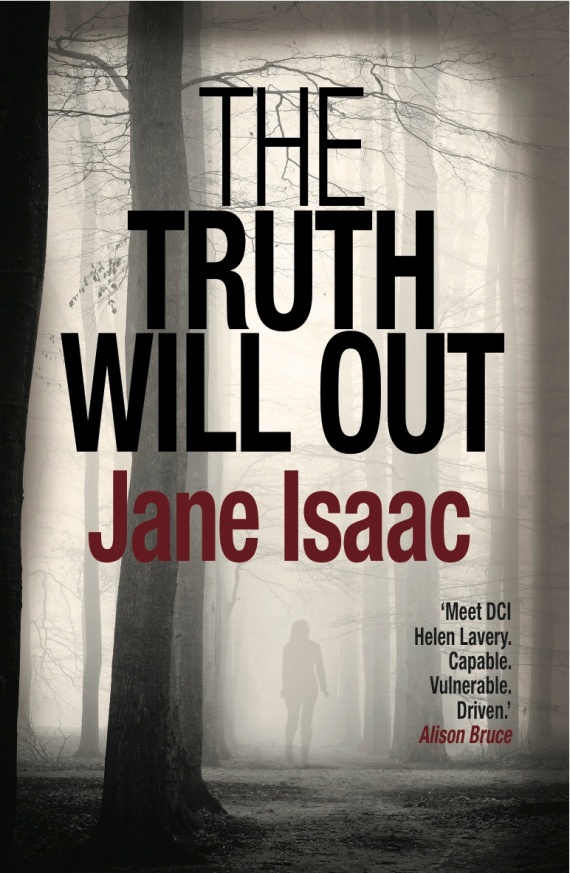 Since retiring from a career in the public services I now lecture at a Midlands University. I also write, promote and publish fiction, through my own publishing company. My lifelong icons are The Beatles and I follow West Bromwich Albion football club. I enjoy learning new things and I am a keen reader. My hobbies include baking and playing guitar and drums.
View all posts by glyntimmins →
This entry was posted in Uncategorized. Bookmark the permalink.